What Should I Do? 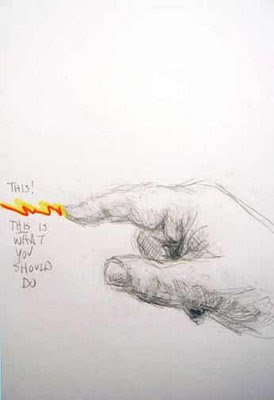 Criticism: Taking It and Dishing It Out

How does your work comes across to other people? Is it almost done? Does that awkward place bother anyone but you? If you're in need of a reality check or just a fresh perspective, your wise and courageous Creative Guidance System might announce that it's time to get some feedback.

Great! A time honored part of the Process. Almost all writers give a gush of gratitude in the acknowledgments for the sainted partner, friend or editor who read every draft and "made this a much better book."

As Shirley Abbott says at the end of The Future of Love, "Sooner or later a writer turns to friends and family. ('Tell me what you think. Pull no punches. But don't hurt my feelings. And by next Monday.')"

Non writers, too, may need the helpful response of feedback. Seeing your work through others' eyes can open you to a world of possibilities that you'd miss on your own.

But feedback also means that ear piercing whine made by a microphone picking up and magnifying sound from an amplifier--it can hurt! Unexamined beliefs (about doing it right, seeking approval, etc.) and habits of self attack can amplify the sound of feedback to a painful screech.

If you're very closely identified with your work, feedback can be like hearing someone pick on your favorite child. While you're keeping yourself from grabbing the offender by the throat, it might not be so easy to open your ears and listen.

If you hear, "You are a dismal failure as a writer and a human being" when your friend says, "I'm thinking this paragraph could be shorter," you'll likely miss the full benefits of your collaboration.


What Do You Say Now, Dear?

Feedback can be rough on the giver, too. A friend offers you their precious creation to respond to; they swear they really want to know. But what if you take a peek and reel back from the smell of rotten eggs--what if it stinks?

If you Google constructive criticism, you'll find the repeated advice to make a sandwich. Say something nice first--that's the bread. The filling is made of mentioning what might could stand some trifling improvement. Finish with another slice of nice.

You imagine trying to scrape together at least a couple crackers worth of encouragement to make a rotten egg sandwich with, wondering if you'll be walking on eggshells around your friend for the rest of your life. 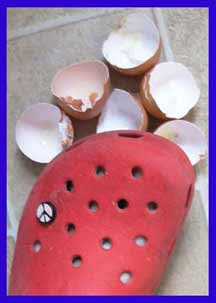 Whether you're giving or receiving criticism, it might help to warm up before you go tippy-toeing through the eggshells. Like anything worthwhile,feedback improves with practice.

Want to explore some wholesome criticism? If you'd like to experience this exercise, please take a few minutes to write it down--doing it in your head won't work nearly as well, if at all.

1. Think of someone working in the same medium as yours who could do better. Write out your feedback for them in an uncensored way. Don't bother to have a humble opinion, just an honest one. What should they do differently? What, specifically, bugs you about their work? It doesn't have to be a big deal. But don't hold back.

I suggest you don't read further until you've done this. Give it a whirl! 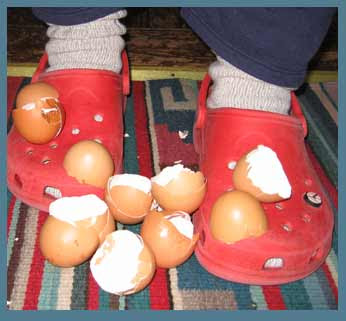 2. Now, very gently, reread what you wrote as if it were neutral, factual commentary about your work, from someone who loves you and deeply understands. Look for where it could be accurate.

3. To go deeper, write three concrete examples of how each criticism applies to your work, and/or to some other area of your life--your meditation practice, your gardening, your spending habits, whatever comes to mind.

4. Next, look for ways that what each criticism points out about your work actually (also) helps it. Something that seems like a problem can turn out to be a strength in disguise.

5. Finally, check out the opposite of each critical statement, and look for where that's true about your work or your life, too. (I don't make everything so complicated, or I make everything so simple). Find examples. Receiving (and giving yourself) positive feedback can be every bit as challenging as the apparently negative.

Say I think someone's article is repetitious. It says the same thing over and over. How many ways can it say that same thing in one paragraph? It gives example after example when I already got it. Don't they have anything else to say? Do they think the reader is an idiot? Ican understand saying something twice to make sure it came across, but this really belabors the point. Over and over, they just say the same thing, sometimes in the very same words!

If I become quiet and receptive and look for where my criticism of them is right for me, I usually don't have to look too far....

You can play with this kind of exploration in many ways. When you happen to overhear criticism of someone or something else, you might check to see, with kind eyes, if it could be true about your work. Go looking for it. The world tends to be generous with criticism. It might be just what you need for a sticky spot in your work.

Those politicians all lie! Hmmm, yes, maybe I could be more direct and honest in my piece. I'm being so political about how it might be received that I've lost track of what I wanted to say. Brrrr, it's too soon for it to be so cold out. Aha! The transition into the cooler colors on the edge of my picture is way too abrupt, that's what's been bothering me....

Before you ask for feedback and the influence that may come with it, you can also take the direct approach, of writing out your own criticisms for yourself. Put down whatever you're afraid someone else might think.Look over what you've written as simply observations that may include valuable guidance.

This kind of practice reminds us of our basic equality with a friend who asked for or offered feedback. No one is the all-knowing expert on someone else's work, and anyone can potentially be helpful.

If, before dishing out criticism, we've sampled the fare ourselves, it nourishes our natural tact and courtesy. And if we've already gotten the habit of taking in useful criticism, even in surprising forms, we'll be more comfortable and curious about whatever our friend has to share.
Then the process becomes a fruitful, collaborative one, alive with possibility.

You Are SO Right!

Ask for what you want

If criticism is a sandwich, it's best made to order.


The person serving may say, "Sorry, not on the menu--I am really only good for nit picky trouble-shooting."

Specific questions directed to what you want to know can help focus feedback and make it more useful. If possible, keep your questions open-ended, to leave room for a view you hadn't already thought of. Essay-type questions will probably get you more to work with than yes/no or multiple choice.


Use Genuine 'I' Statements

Even if you're on fire with the conviction that your opinion is correct, don't pretend to be a burning bush delivering the Objective Truth. It will be easier to hear coming from an ordinary mortal.

"I thought..." "My response..." "To me...." "My feeling is...." These can help remind both people that they can only offer their own experience of a piece, which is all that is needed.

If you start to feel defensive when receiving feedback, check in with yourself about your motives. Are you still in it for the sake of bringing out the best in your work, or are you after something else now?

It might be time to take a break, or to revise what you ask for."I could use some reassurance that you get what I'm trying to do here."

If you find yourself explaining and justifying, you've stopped listening. Since you already know whatever you're explaining, how can you find out something new that way?

Sometimes it helps to stay busy taking notes on what your friend says; you can sort through your reactions later.


You Can't Make Me

Your friend might have given you some brilliant suggestions. But if you rush to slap their insights onto your piece, you might find yourself disconnected from the process, trying to get it right in someone else's eyes.Then it's easy to become bossy, demanding and ultimately dissatisfied with your work.

Take some time to digest feedback and make it your own. Then your next moves will evolve organically, from your own creative spark that has brightened through contact with another.