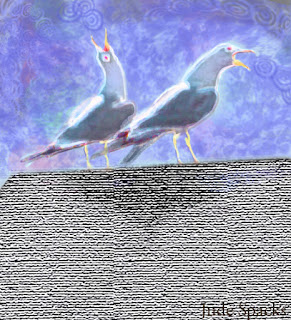 For 18 years I lived reclusively in the small attic apartment of an old clapboard house on the main route into town. Chimneys ran up through the center of the kitchen and the bedroom; I tracked round and round them. Seagulls sometimes landed with hefty thumps on the roof and fussed at each other. It was like living on a boat in the sky, everything wedged in tight.

In winter it was beautifully quiet up there. With the leaves off of the trees I could see to a small slice of the bay through one of my three windows. But in summer, it got loud and hectic above the road gushing with tourist traffic. Since I found earplugs uncomfortable, I tried to imagine the waves of vehicles passing as ocean sounds, or to drown them in the white noise of a fan, but still my nerves felt abraded.

One summer, construction projects for a sewer line were also happening on two sides of the house. Heavy trucks and machinery started up at 7am and carried on all day. Back-up beep-beep-beeps pierced the air constantly. I felt like I couldn’t stand it. Sometimes I wanted to grab hunks of my hair in each fist and rock, moaning.

My girlfriend found a way to suggest a daring question: what if it really wasn’t all that commotion which was upsetting me, but only my resistance to it? Supposing nothing between my ears seized on those vibrations, identified them as irritants, rejected them? Mightn’t the sound waves just pass right through my mind without bothering me?

I guess this question could have landed with me as irrelevant, or worse: mocking the sensitive victim of objective noise-torment. But as it happened, I felt curious. I was ardently practicing Byron Katie’s Work at the time, so I took the question into self-inquiry meditation. I realized with astonishment that it really was my aversion to the sounds which troubled me, rather than something inherent to the situation. Huh. Good to know. I still didn't like it, though.

Gangaji tells a story of her teacher Papaji reading aloud a letter he’d received to a circle of his longtime students. In the letter, a man described his difficulty in meditating, since he lived above a 24 hour garage which was noisy all the time. “What would you tell him to do?” Papaji asked. The students suggested things like, ‘He should listen for the deeper Silence which holds all sound.” “He might realize that he is one with the noise.” “No,” Papaji said, “Tell him to move!”

Of course, go ahead and adjust circumstances to your liking when you can. Or, maybe you'll see whether you can shift your internal state somehow. But what if you don't have to manipulate or force solutions within or without in order to feel at home?

As I've settled into more understanding of how my experience is created by my thinking, things have gotten easier. My notions, interpretations and projections may still masquerade as solid reality and I may react accordingly, but that illusion is more porous and less convincing and it doesn't last as long. I have less of a personal stake in my own role, less anxious effort to boss situations around. I'm more available to let life move me in creative ways to work things out.

After I'd questioned it, that visceral intolerance towards the construction noise somehow let go of its grip on me. This seemed like a miracle. I remained an introvert who luxuriates in quiet, but I felt more flexible—if I wanted a break, I could go somewhere else, without pining for an imaginary silent apartment that didn’t exist at that moment.

The next summer, and every one after that until I moved out, the traffic sounds honestly didn’t bother me at all.

Community of the Spirit


There is a community of the spirit.
Join it, and feel the delight
of walking in the noisy street
and being the noise.
Drink all your passion,
and be a disgrace.
Close both eyes
to see with the other eye.
Open your hands,
if you want to be held.
Sit down in the circle.
Quit acting like a wolf, and feel
the shepherd’s love filling you.
At night, your beloved wanders.
Don’t accept consolations.
Close your mouth against food.
Taste the lover’s mouth in yours.
You moan, “She left me.” “He left me.”
Twenty more will come.
Be empty of worrying.
Think of who created thought!
Why do you stay in prison
when the door is so wide open?
Move outside the tangle of fear-thinking.
Live in silence.
Flow down and down in always
widening rings of being.

My neighbor the rapid Buddhist was already whizzing away after our chat, when she turned back with one more thing. "I'd like to start writing again--but I never seem to get to it. Could you tell me what to do?"

I adjusted an imaginary coach hat on my head and responded, "How 'bout this? For a few days in a row, write for just 10 minutes and then stop."

She scooted back towards me, shaking her head. "Oh, no, no, no.  I have to write at least a page...that's what I used to do. It takes way longer than 10 minutes."

"Ok, but I hear you haven't been getting to write that page lately. Why not try 10 minutes, or, say, 3 sentences--whatever seems like a very easy amount--then stop? Later you can do more--you'll want to. But warm up first by practicing ease and stopping. That's a good place to start."

I imagined other ways she could play with interrupting the habit of Not-Writing to help shift her can't-get-to-it pattern. Even by mentioning it, she could already be renewing awareness of her lucky freedom to write or not. I didn't say this out loud--she was in a hurry.

She called back cheerily over her shoulder, "I can always use practice stopping!" as she hustled away. (When I next saw her, she said she'd begun writing her page-a-day again).

Most of us can use practice stopping, especially when there's resistance to starting something creative. Even the thought of the possibility of pausing may unravel the rope in a mental tug-of-war.

What might you want to stop, as an experiment?

Maybe:
Why not stop waiting for a shinier spark of inspiration, a bigger view, less squirmy fear, a better time? Why not engage with the humble, no-big-deal possibility in front of you now? Follow the path opening footstep by footstep under your own wise feet.