As a lake exists by containing only a limited amount of the infinite quantity of water, a person is defined by the choices they make based on integrity.

Without the structure provided by limits, creative choice would dissolve into boundless, formless mush. But too much limitation makes for the rigid control that provokes resistance and rebellion; so "it is necessary to set limits even upon limitation." (Wilheim/Baynes translation of I Ching Book of Changes).

Following the advice of this hexagram might mean trusting the integrity that tells you your project needs more work to meet your own standards. Or it might mean, don't persevere to the point of painful perfectionism: here's the deadline, it's as done as it's going to get.

Want to consult the oracle? Think of a life situation related to limitation. Take a moment to jot down a question: what would you really like to know about how you should proceed? Then pick a number 1-6 and write it down.

OK, you have a question about a limitation, right?
And you picked a number between 1-6 ?

Bearing the question in mind, read the lines corresponding with your number.

Hold them lightly. Wait quietly until you hear your own Voice interpreting the prompt into sensible right-feeling advice for your situation.


1.You need to know when to stop. If you accept the limits set for you, great power will accumulate for decisive action when the time is right. For now, be scrupulous in minding only your own business, and don't say much.

2. It's time to move. No holding back now. Don't hesitate past the moment when the obstacles to action have been removed, or you will miss your opportunity.

3. Take full responsibility for the consequences of having resisted necessary limits in order to seek pleasure. Then you can regain your sense of integrity and learn from mistakes.

4. Go with the flow. The limitation is a natural one, like the fact that water moves only downhill. Success comes from saving energy that would be wasted in struggle and effort; that energy can now be wholly applied to the benefit of the matter at hand.

5. Walk the walk. Whatever limits you think would be good for someone else, try them yourself first, asking little from others. If they like what they see, they'll emulate your example.

6. Overly severe restrictions will always bring about rebellion. Renounce strict measures that attempt to externally control the situation, and show mercy to yourself as you remain uncompromising in adhering to your integrity.
Posted by Jude at 5/24/2008 08:18:00 PM 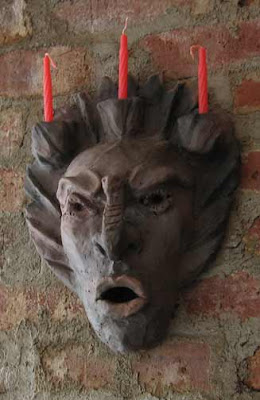 Durga: The Goddess of Self-Affirming Anger

This sculpture was one of the biggish things that have departed in my birthday giveaway (see original post, and update). It lived on the chimney in my kitchen for many years. I made it at a workshop with the wise and gifted artist/teacher Squidge Liljeblad Davis of Starflower Farm and Studios, a beautiful arts retreat center in Maine.
Durga, The Goddess of Self-Affirming Anger is saying "No!" (can you tell?). I'm grateful that No has less fear, push and resistance in it for me now. No doesn't have to be angry--it can be kind and open-hearted (see article on Personal Freedom). Maybe anger can be open-hearted, too. It seems to take a lifetime to learn about that. 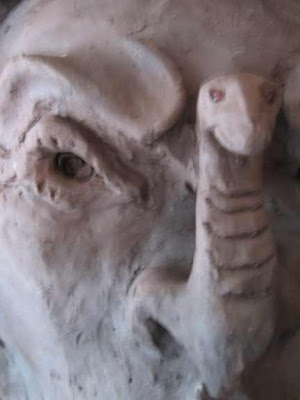 The nose snake has little garnet beads for eyes. Close up, it looks kind of cute to me. Like being an agent of transformation is a secret joke. Maybe for some beings. It's easy to miss the humor in anger when it's personal and coming at you (or out of you). Not that it's such a laugh when it's impersonally bombing someone else to smithereens, either.
Calling Durga The Goddess of Self-Affirming Anger was the inspiration of a beloved friend who died a couple years ago. Joanne was quite the agent of transformation herself. She celebrated the kind of anger that gives the courage to stand and speak up for yourself, the anger that refuses to hide and repress itself. But it's not always so easy to tell that kind from the Accusing Demon of Self-Righteous Anger, which gives off a toxic smoke, not a good, clean burn. 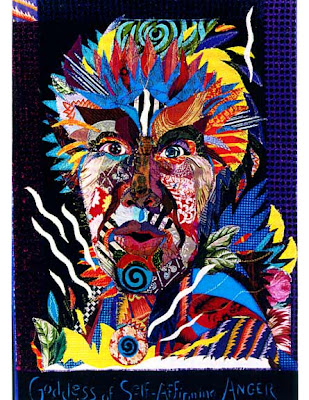 Like many of her close friends, I took a ride in Joanne's hot seat once. Suddenly, instead of playing the agreeable role of trusted confidant, I found myself cast as the betrayer. Later, Joanne had the grace to respond to a heartfelt valentine's card I sent her, ending a 3 year break in our 26 year friendship. But she wasn't satisfied that I'd understood what I'd done that hurt her.
She was right: I'd never really understood, or at least, I saw it differently. From my perspective, Joanne had taken offense at something insignificant and harmless that truly had nothing to do with her. I could relate to the sensitivities that probably triggered her upset and I respected her acute bullshit-detector. Still, I couldn't honestly agree that I had done something I shouldn't have that caused her distress.

Eckhart Tolle says, "Ego takes everything personally....it cannot tell the difference between an event and its reaction to that event. Every ego is a master of selective perception and distorted interpretation." (A New Earth, p.68). An angry ego isn't receptive to the possibility that its own distorted, defensive interpretation is the cause of its pain.
In retrospect, that conflict with Joanne gave me a valuable inkling that it might be possible to investigate rather than identify with the interpretations my ego comes up with. Instead of my usual reflex of automatic guilt when someone was mad at me, it was unusually clear to me that Joanne wasn't really a victim of my behavior, but only of what she thought it meant. The same could be true for me, when I'm angry. 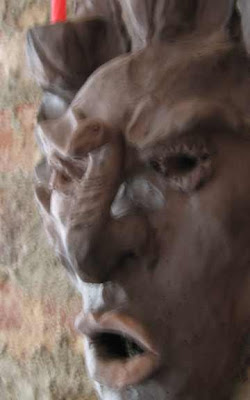 No matter what we believe occasioned or caused our anger, even if we're right, what "self" is really being affirmed by it? "Emotion arises, defensiveness, perhaps even aggression. Are you defending the truth? No, the truth, in any case, needs no defense....You are defending yourself; or rather the illusion of yourself, the mind-made substitute...." (Tolle, A New Earth p 68). 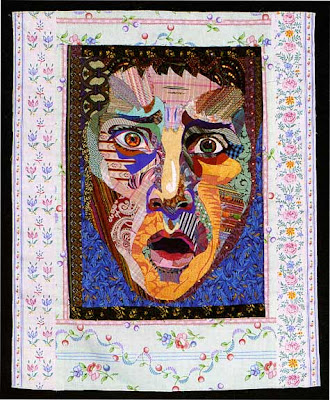 This piece is half of a double self-portrait. It shows a reaction to an abhorred reality that "shouldn't be" as it is. (More about witnessing emotional states in Art When Upset). It floats like a mask, an illusion of a self hurling unappeasable hurt and accusation outward, distress that only bounces back off the mirror to the face facing itself.

Thich Nhat Hahn, in his helpful book, Anger, advises taking good care of our anger, as we would of a crying child, by practicing mindfulness and presence with the turbulent emotion. When dealing with a crying child it is understandably tempting to give it whatever it seems to want in hopes of quieting it. The second half of this piece (below) faces the upset of the one above with a serene, compassionate acceptance. Its title, I Believe You, offers the validation that the angry one seems so hungry for. 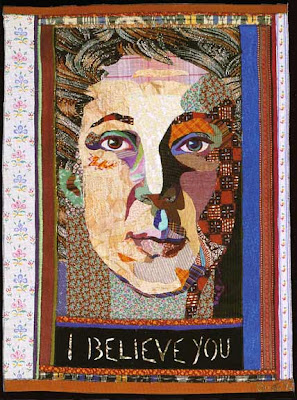 In recent years, the sympathetic agreement that sides with anger has been seeming to me like a limited kindness at best. It could be like agreeing with a crying child that there is a monster under the bed, that a nightmare is real. It could be a trick, a false comfort, even a kind of enabling--appeasing an addictive craving that only intensifies the desire--to be right.
"There is nothing that strengthens the ego more than being right. Being right is identification with a mental position--a perspective, an opinion, a judgment, a story." (Tolle, A New Earth p 67). In my experience, validating a judgment that something shouldn't be as it is can't cure distress. Neither can the most courageous artistic witnessing. What can ultimately bring relief is investigating the story that created the angry reaction.
So far, in 6 years of using The Work to inquire into stressful stories, I haven't found a single case where what happened was actually what angered me, no matter how adverse the circumstances appeared. Always it has been what I thought happened, what I thought it meant, my identification with a mental position, that caused my upset.

Nowadays, as self-inquiry has brought me so much more freedom and peace than I ever thought possible, along with the joy of a far less solid identity, I'd title that image of compassionate response to anger differently. Instead of I Believe You, it might become Is It True? the first question of The Work of Byron Katie.
Anger comes to me now sometimes as a red alert to let me know I'm believing in a mind-made interpretation and I am confused. Instead of affirming the little threatened made-up self that created the distress, anger can turn around into a wake-up call that clears up the nightmare, leaving a genuine peace in its place.
"Is it true, sweetheart?" I ask myself in Katie's loving voice when I think something or someone is wrong. "Can you be sure?" "Who would you be without that story?" Without the story I rediscover a nameless self, a love that affirms all and leaves no adversaries. I feel grateful beyond expression, starting fresh, a new moment now, utterly innocent. 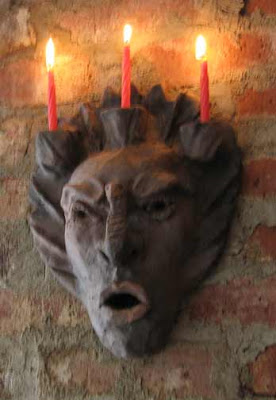