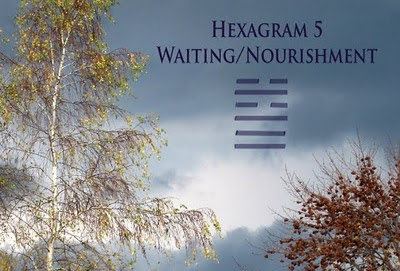 Want a quick reading based on one of the world's oldest advice columns (the I Ching Book of Changes)?

We'll look at #5 of the 64 hexagrams that make up the I Ching: on Waiting/Nourishment.

First, you might want to check in: is there something particular you're waiting for? Maybe jot down a question about handling the wait.
And, pick a number between 1 and 6. Write that down too.

Read below about the hexagram, or, scroll to the bottom of the post to see the suggestion/pointer corresponding to your number.

What are you waiting for?

For a lucky break? To find out what happens? To finish something so you can get on to something else? For an ordeal to be over, a danger to pass? To get to the head of the line?

Waiting has been on my mind. I'd been working on a picture that meets the suffering side of waiting–a portrait in fabrics and paint inspired by a sketch called 'Woman Waiting' that I saw in a book of artwork made during the Holocaust.


More recently, I'd been fidgeting while waiting to find out whether something I really hope for will happen.

I've noticed that this wait is only a problem when my impatient mind rushes ahead trying to stack up future decisions on the shaky foundation of the not-yet-known.

When I wait impatiently, I wheedle for insider information from the Universe--come ON! Give me a hint? My hungry mind is like a kid badgering for candy at the checkout. This is tiring and not-nourishing. The I Ching reminds me to conserve my energy for later when there's something to do.

A quick way to fortify the body-mind

Sometimes good cheer isn't so easily come by during a wait. Here's something that usually helps me when I remember to try it: Instead of seeking to drop impatience, simply shift attention to the space behind my back.

No matter what fills it, there's always just as much space behind your body as in front (likewise above, below and to the sides). What happens if you just notice that back space, and allow the body to settle into it instead of pressing forward and up in a posture of rushing towards the future?

There is a comfort in letting yourself be exactly where you are, as you are, even when it's not comfortable. And it helps to recognize that your state is always changing. You might watch your breathing for a moment, noticing its shifting qualities, without trying to alter it. Give yourself full permission to rest here and let gladness restore itself even before you know the outcome you're awaiting.

It is also possible to wait too patiently

Sometimes I catch myself putting life on hold while waiting for something important to play out. If I endure in limbo for long enough without agitating, will my enforced 'good attitude' somehow be rewarded?

Circumstances don't often bend to fit this fantasy. The antidote the I Ching advises? Self-honesty--get real.


"One is faced with a danger that has to be overcome. Weakness and impatience can do nothing.
It is only when we have the courage
to face things exactly as they are,
without any sort of self-deception or illusion,
that a light will develop out of events,
by which the path to success may be recognized.
This recognition must be followed
by resolute and persevering action."
--I Ching Hexagram 5 Wilhelm/Baynes
_______________________________________

So, did you consider a question you may have regarding waiting? And did you pick a number between 1 and 6?

Read the suggestion corresponding to your number and explore how you might relate it to your question or situation.

Labels: Hexagram 5 of I Ching, I Ching, Nourishment, Waiting

I gave myself four creative retreats this past year, of 10 days each. It seems miraculous in retrospect that this was possible.

One thing I hoped to work on was a fresh way to integrate painting with the fabric collage process I worked in for 30 years. I've experimented with this plenty of times before. But even though some approaches have been satisfying, a breakthrough had eluded me.

The first 3 retreats had been pretty much a flop as far as finding this opening, though none of them felt at all like a waste of time. I wound up with more pictures of water--worshiping the pond that is one of my all-time favorite gurus. And I made the self-portrait eyes that went into the header for my new coaching website at www.selftreasuring.com .

(Actually, the first retreat had resulted in the Self Treasuring name, which came about from working on nests--you never really know what you're really making while you're making it, in a way).

The final retreat of the year, in late fall, had the earnestness (or recklessness) of endings about it, a now or never feeling. I really wanted to try something different.

But I found myself digging out something old--a piece I'd started in fabric collage 15 years ago and never finished. It was based on a drawing I'd xeroxed from a book of art created during the Holocaust--I'm still trying to track down the artist's name.

Here's where I'd stopped with the fabric collage 15 years ago:

As I went back into the piece, I felt in collaboration with two other artists--the person who'd done the drawing, and the artist I was 15 years ago--along with the energy of the woman portrayed in the sketch. I was being all of them at once as my hands picked up pieces of cloth, the iron, glue, the paintbrush.

I heard anxiety in the mix: a WhatWillPeopleThink? voice, worried about making something unpretty, not 'uplifting'--something no one will want to see. I heard a deeper thrum of the fear of the injustice, loss of control and death represented by the Holocaust. I heard the dreaded gremlin MizSpiritual trying to levitate above that fear, sometimes grousing about hadn't we evolved past Hard Stuff pictures?

And all the time, that feeling of being carried, of choice-making happening of itself, that no-self experience of giving over into a creative process which feels so profoundly at-home. How should I know what I'm to make? It was being made. There was a fullness of gratitude that can't be expressed. Making light of hard stuff without even trying to.

When I could stand back from it and let the finished piece teach me, I witnessed something fiercely beautiful after all. I saw how light just pours out of us, even when we're angry and afraid and hurting, even when terrible things are happening, and we're waiting for something worse. Every moment, everybody is just such a beacon.

Even when nothing terrible is happening, sitting in front of a screen, just witnessing and connecting--maybe like you, now. Making light. I don't really make anything--making happens through me--but all I ever want to make is something about that Light. (And that's not MizSpiritual talking, it's just the facts, m'am).

Now that the paint/fabric intersection is happening in a new way, I'm ready to go back into another piece that started during the summer retreat, a portrait of Ramana Maharshi, who radiated the peace behind and around and within every beauty. I'll find a way to open time for this in the winter, when that Stillness is so palpable in the north.

This winter, I'll also be leading a coaching group for 9 self-aware women who are ready to meet the creative challenge of their Next Big Thing (even if they don't know what that is yet). Might you join us? Read about the Mystery Mind Creator's Colony here.