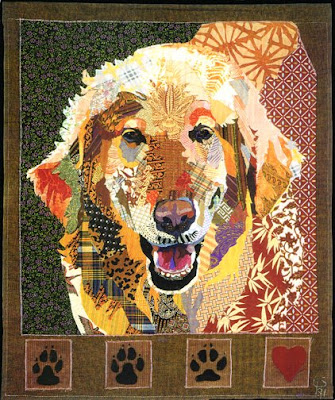 
Fred was three legged golden with a big heart. His person used to talk about him as a true mirror of God (dog spelled backwards); she found it inspiring that Fred had no idea that there was anything lacking in having 3 instead of 4 legs. It was obvious that his essence was love, he had faith in the way things are and could care for all things.We kind of expect a dog to be a mirror--knowing the cliché of people looking like their dogs--but sometimes we might forget the compliment to the human implied in that.
-----------------------------------------------------

Sam, the boatyard dog, was part of the same family later on. The painting was commissioned as a surprise gift, and the only photo that could be spirited away without notice was this wonderful black and white one (below) that I worked from; (Sam had died and we'd never met). A friend snuck in and stole a color snapshot off the fridge, replacing it with a color xerox, so I could study it for color hints. 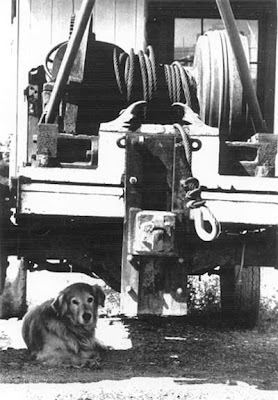 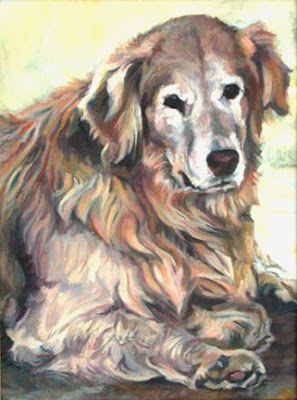 
-----------------------------------------------------
A client who loves dogs has never felt able to live with one. She said she just couldn't handle taking in that much unconditional love, it made her feel unworthy and also over-responsible somehow. And she thought she could never recover from the loss of a dog, that her heart, once opened, could simply shatter. There were other conflicts she projected on dogs, too, like seeing powerful people as "top dogs" and herself submissively slinking off with tail between legs.

She took my suggestion to watch some Dog Whisperer videos. (I see Cesar Millan as a profound spiritual teacher, almost as much so as the dogs he works with.) She was entertained by the shows, and she found some good applications of Cesar's much-repeated advice to remain calm and assertive--with herself and other people, if not with a canine. But a breakthrough came much later, by surprise. 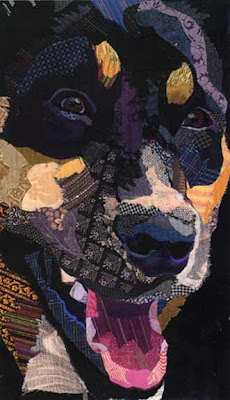 On a trip to Mexico, at a sacred site, she was approached by a thin mother dog, with hanging teats and ribs showing.

"I was instantly afraid; if I opened to loving her there would be a whole rescue project, shots and red tape and trying to bring her back to the States," she said.

"But I couldn't close my heart. So I shared my crackers with her. Maybe I should have been scared that being a wild dog she'd bite my hand off. But at the time I didn't think of that.

She took each cracker with great delicacy. She was so present receiving them, as if she were taking communion. She enjoyed every sacred crumb. And then she gave me one grateful look in the eyes and just...left!

Later I saw her working some other tourists for their crackers. And I got it. There was no guilt trip, no rescue mission, no obligation. She knows what to do. She's held. She's fine! So I got to know what unconditional means, I got to meet it in myself." 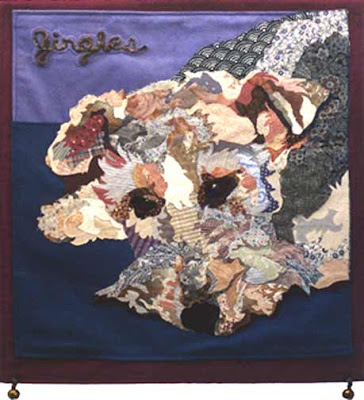 Jingles, fabrics '90?
Later, she was working on her food issues, berating herself for eating a whole bowl of chocolate pudding.

"What would your Mexican-mother-dog-guru tell you about that?" I asked.

"She'd show me to enjoy every lick. She'd tell me that how ever much I'd had was the exact right amount. And you know, I did enjoy every morsel of that pudding. I curled up on the couch with the bowl and ate it slowly and just savoured it. It's not true that I shouldn't have!" 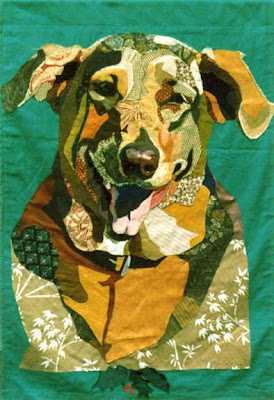 Holly, fabrics, '88?
Since then, Mexican-mother-dog-guru has been shortened to the obvious holy name of Dog-Ma. Dear DogMa, Bless our food. Teach us gratitude. Mirror the unconditional in our hearts. Show us Enough, here and now. 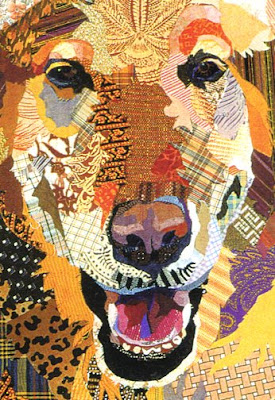 Why Do You Ask?
for Donald Hall

I can't make
any story
about my life

the radio
is predicting
more snow.

I ask my dog
to tell me
a story, and she

never hesitates.
"Once upon
a time," she says,

"A woman lived
with a simply
wonderful dog..." and

she stops talking.
"Is that all?"
I ask her. 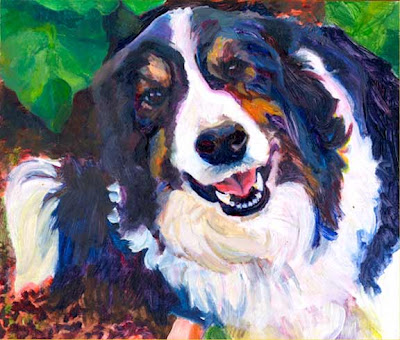 If you like your unconditional love in feline guise, check out Cat Love and Wilda, where I admit I gush.
And if you want more dog-love, read about Lady, the Canine Creative Life Coach 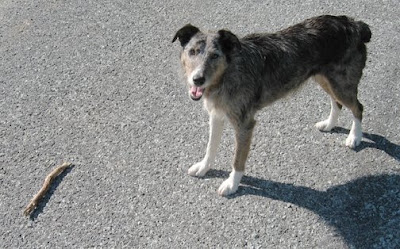 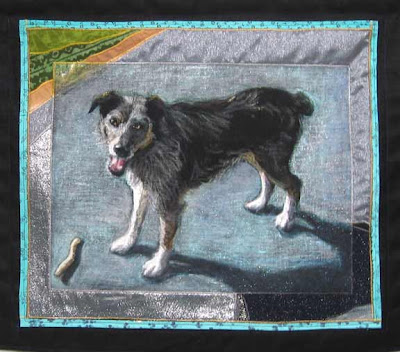