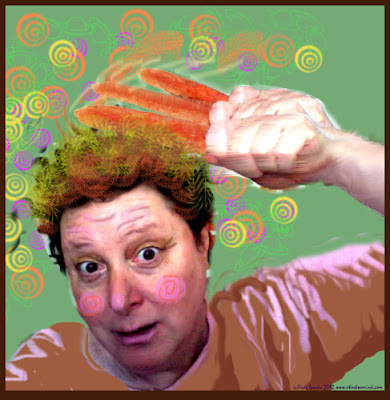 A client was deep in the woe-throes. Her mind whirled with worry and self-criticism about everything she wasn't getting done.

"It sounds like you believe that you can't feel better until you do the things on your list," I said, noting the obvious.

She was too polite to say, "Duh!" She re-explained the dire urgencies involved. Her scenarios gathered momentum, careened into side paths, pin-balled off impossibilities.

"Do you think you have to do everything on the list to feel better? Or could you do just one thing?" I asked.

Everything! That terrible anxious bad-girl feeling would not let up until every single crucial item was done. Her mind supplied even more reasons--excellent, compelling reasons.

Except, so far, they hadn't worked to compel her into action. However much the voice she called Responsible berated her, somehow the flip-side she named Irresponsible wasn't actually doing anything.

"Can you be certain that this theory, the I'll-Only-Feel-Better-When-It's-All-Done hypothesis, describes how this really works? For instance, is it possible that you could start feeling better, out of the blue, even if everything on the List wasn't done? Could you just be graced with a better feeling?"

"And is it possible that, even if you did everything on the List, you might not feel better, or not for long?"

She supposed so. Responsible might just pile on more items, and keep hounding Irresponsible into obedience by dangling the carrot of temporary satisfaction and threatening with the stick of feeling wrong and afraid.

Plus: running after a carrot or fleeing a stick both tend to be stressful ways to live.

I call my version of the players in this pattern Gotta-Gotta and Can'tMakeMe. Or I use a friend's name for one of hers: Ina Wanna. My client is far from alone in this kind of inner tug-of-war.

The natural satisfaction of doing things we want to can be sucked up into this belief system and used as evidence that the carrot and stick trick worked. But maybe the good feeling came not so much from the Responsible part winning or being right, but from a ceasefire.

Maybe it simply feels good to put down the carrot/stick and relax into the present for a few minutes. Maybe that can happen before the conditions we think we'd prefer are met.

Do we really have to force, manipulate and boss ourselves around? Does it really help to get things done? It can take courage to even consider dropping the pressure. It's like being a heretic to a cultural religion.
----------------------


My client began to recognize that her pain was in her brain. Her distress wasn't coming from the incomplete list or any of the possible consequences that her imagination could paint so vividly. It was coming from the pattern of conflict happening in her thinking, which didn't reflect reality.

She could see that players in the pattern were innocent. They were both out to protect her--Responsible by motivating her towards helpful action, Irresponsible by insisting on her freedom and flexibility. They were on the same team, really.

But the conflict wasn't giving her any leverage over getting things done, not in reality. Nor was it helping her feel free. In fact, it was making it much harder to do anything at all.

She dared to look within and explore who she would be without the whole pattern. What would really happen if she tried, just for the moment, stopping this carrot/stick schtick (which wasn't working anyway)?

She saw that without buying into the Responsible/Irresponsible drama, she'd be simply a person, breathing in and out--maybe picking up the telephone, making a note on a piece of paper, asking a friend a question. Taking care of the nitty-gritty of the list (or not) with the sweet, familiar peace and freedom of her own presence. Grateful. Willing. Unafraid.

It only took an instant.


"In the desert you see a river mirage and you are thirsty.
The more you chase it, the further away it moves.
You can never quench your thirst in that river.
This is samsara. You want to quench your thirst and
you move toward an object of enjoyment and you get no enjoyment.
Once you know, by your experience, that it is only a mirage,
that no river exists, this understanding alone is enough.
You will not run after these things. You will stay where you are.

This is the rise of desire,
to quench the thirst running after a mirage.
And nobody is happy running after imaginary rivers in the desert.
Nobody is happy. One desire leads to another desire.
Who is there that says, “I am satisfied”?

So we have to turn to that which is beyond suffering and misery. 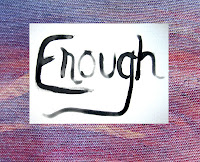 The process that helped my client return home to herself is one kind of Creative Mind exploration we use in Truth and Dare Coaching.  If you feel drawn to this work, you may want to apply for a no-charge introductory consult by phone to see if we'd be a good fit to work together.